Even though this loco does not fit my chosen layout area it proved irresistable. It will be a constant reminder of my apprentice days around Old Oak Common and Willesden and I will have to concoct plausible special workings to justify its appearance.

And its appearance is pretty good. Have a look at the "As delivered" pictures. 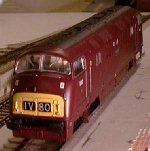 Examination showed that four jobs were needed before the loco could operate on Grovenor Sidings. The following sections give more details of these tasks:

Initial investigation did not reveal any appropriate wheels on the market at that time (January 1999), so this section is mainly concerned with my efforts  to retyre the existing wheels.  As  acceptable wheels were eventually discovered in the Alan Gibson range use of these wheels is also covered. Ultrascale have since produced the correct wheels which can be used exactly as the Alan Gibson ones.

2. Raise the body on the bogies to bring the buffers UP to the correct height.

(Is this the first ever RTR diesel that sits too low!  the Grampus is the right height honest) The bogie mounting arrangements are rather unusual and it looked as though this task would be a bit tricky. Something to think about while struggling with the wheels.

No problems here, there is plenty of room. Have a look under the shell: at   the chassis, circuit board end. and  the chassis, free end.

Another one to have a think about, I didn't want to make to much of a mess of the nice front end.